My first week back at work after the holidays was a bit unusual- instead of biking into central London to go to the office, I took a flight from North Carolina to Austin, Texas to train people in a behaviour change tool to get people to consider other alternatives to their car for daily trips. I’d never been to Austin before -or Texas for that matter- and it has a distinct reputation preceding it (for being ‘weird’, for being hip, for being ‘an island of blue in a sea of red’, etc.). I knew I wouldn’t have a lot of time to explore, and I wouldn’t have access to a car so I’d expected to only be able to go to places within walking distance. So I broke from foodie ritual and did not make a list, or even do a search for local blogs. I came as innocent as they come to the city that gave birth to the likes of SXSW, Whole Foods, and food trucks. But in my limited time, and my limited view, I did want to know- was Austin all mouth and no trousers?

One thing I loved about Austin was how walkable (and bikeable) everything was. I was staying in a hotel on Riverside, just across the river from downtown. My room had a glorious view of the river, and across from it City Hall and all the high rises of the city. 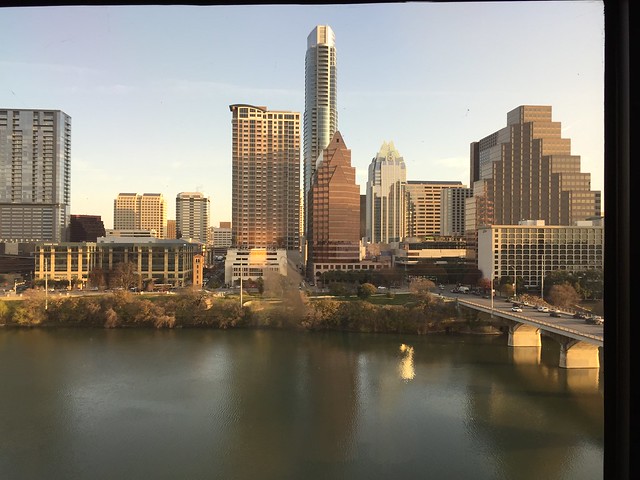 I had pretty low expectations of what I’d find in the downtown. Downtown American cities tend to be a bit of a wasteland- windswept canyons of glass and steel, dotted with the interminable Starbucks at the corner of every block. A friend who used to live in East Austin told me it was a boring, cookie cutter place- and I’m sure that compared to some of the hipper neighbourhoods, it totally was. But there was plenty of life and interesting places to pass the time; the Starbucks’ were still there, but the independent shops, cafes and breakfast taco joints far outnumbered them.

I was in good company in Austin. People had things to say about food, and an appreciation for the good stuff. I was lucky too in that one of my training attendees was a big foodie- she owns her own bakery, as well as holding down a full time job at the City, raising a kid and doing a PhD (man, she made me feel lazy!).

On the first night my hosts took me to an ‘old’ hotel on 6th Street, The Driscoll. It was very grand, complete with marble floors, and massive stuffed longhorn cows’ heads in the bar. Monday night happy hour was ridiculously cheap, but otherwise pretty unridiculous. With our martinis, we ordered the Texan bar snack stalwart, “queso”. As far as I can tell, this is typically melted plastic cheese with bits in. I’ve had some pretty plasticy versions before, but this one was actually encouragingly cheese-like. The tortilla chips that came with it were freshly fried, something I wish was the status quo for nachos in the UK rather than the nasty dorito-style packaged ones. It makes such a big difference. 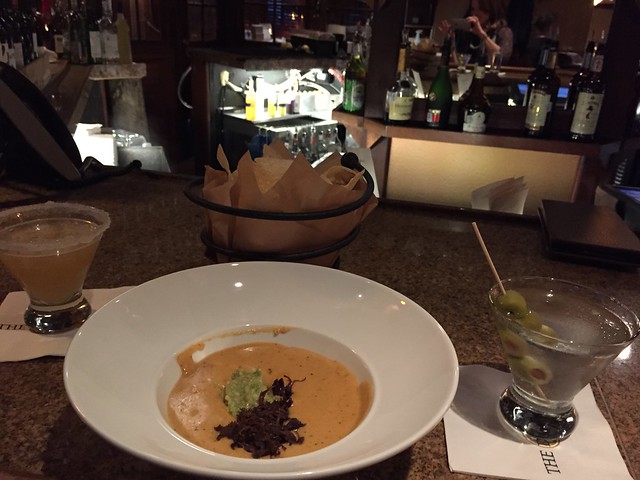 Texans are a proud folk, and Austinites are fiercely proud of their city. When, in passing, I mentioned that my parents worked at the first Whole Foods shop, which was in New Orleans, they were quick to set me right and inform me that Whole Foods started in Austin- in fact, they have their headquarters there (well, better do some fact checking with the parentals… who knows what else they’ve misinformed me about!). So I duly trooped along to the World’s Biggest Whole Foods Ever. If you don’t like choice, you should not go there. Or really, if you don’t have at least an hour to get around the shop and hunt down the products you’re after, you shouldn’t go there. The HQ, parking, function rooms and supermarket took up an entire block, and the shop floor itself must have been a square mile. There were whole aisles dedicated to charcoal, yoga pants, water filtration systems… but I failed to find the yoghurt and dairy section despite at least two thorough rounds (a significant time investment). But the groceries themselves only take up a small proportion of the shop. Someone told me they tried to take their grandparents there for lunch, and they had to leave and just go home and make a sandwich. There’s a juice bar, sashimi stall, ‘bistro’ counter, wok station, four separate salad bars, and then a whole other section in the back which I couldn’t even face entering. There’s a wood burning oven bakery, coffee roaster’s… this was Whole Foods on steroids. I guess that’s how Texans say they’re local and they’re proud. 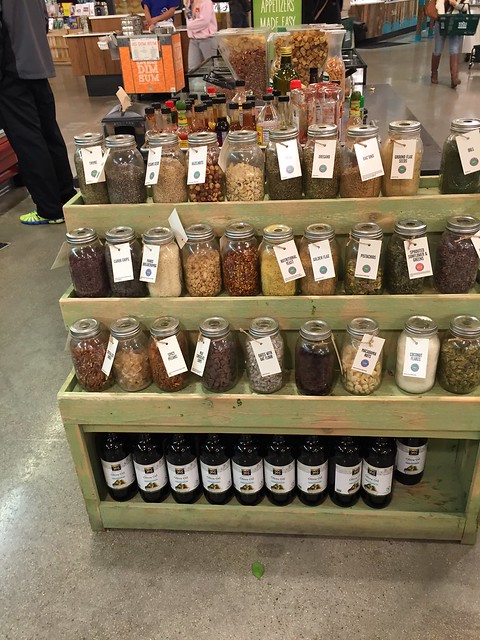 Although I didn’t write a list, my friend Tony wrote one of his favourite places in Austin. Most of them were out of range for me to try, but I did make it to Easy Tiger, a bakery and beer garden, and made it back again, and again. 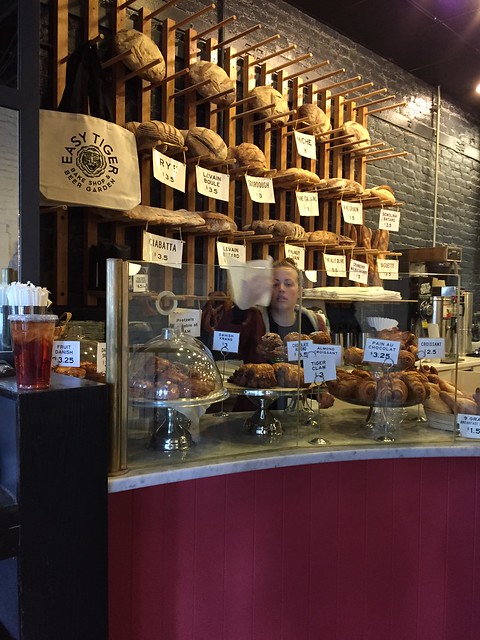 leaning in for the kill: the Danish Krans was my favourite pastry at Easy Tiger. A pastry ring filled with thinly sliced almonds- like an almond croissant, but more dainty, and somehow more indulgent too.

Austinites were pretty insistent that I had to at least go to a food truck while I was there (another foodie trend they claim the origin of- I have not fact checked this). The one I went to, My Thai Mom, was serving Thai food (no surprise) in a little paved area just off Congress Ave, next to the Capitol building. I had the ‘Thai Noodle Soup’ with chicken, which was basically pho. They asked how spicy I wanted it, which I liked. I was coming down with a cold, so I wanted something really quite spicy. I went for ‘sweating, some crying, but still tasting other flavours’ and they got it bang on perfect.

Until we meet again…

So that’s about all I managed in my time in Austin, but if I get to go back, I’ve got a good starting list of places I didn’t make it to this time. Other things I liked were Royal Blue, a mini chain of bougie grocery stores, who do a decent lunch and a damn fine cortado; biking around courtesy of Austin’s B-Cycle hire scheme; learning about Austin’s recent history along the well-trodden path of gentrification (or ‘re-gentrification’ as a local endearingly called it). And mostly, I enjoyed the people, especially those who went out of their way to show me the city they’re rightly proud of. Thanks guys- and I hope I get to repay the favour one day! 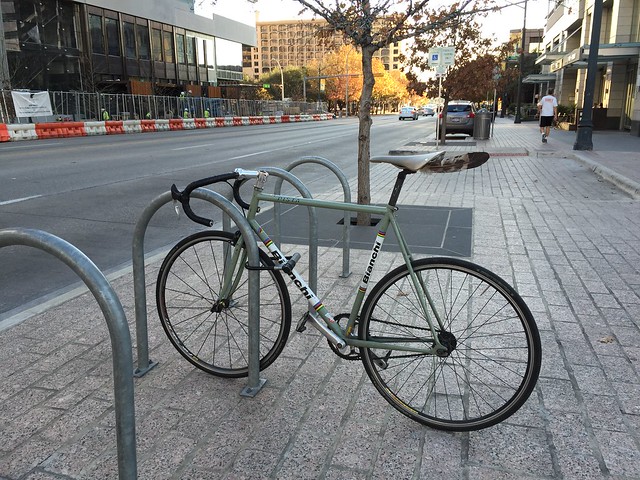 Austin is a great cycling city, thanks to a flat, compact city centre, and all those local birds’ feathers helping with the aerodynamics