For our second feast, the order of the day was to feed 23 extended family members, and the theme was Greek food.

Again there was going to be very little preparation time so I went for things that could be made in advance and left in the fridge to be whipped out at the last minute. Luckily, a lot of Greek food (especially in winter time) is designed to be made in bulk, and last a long time just for these kinds of scenarios.

We decided to do an array of vegetarian meze to start with, and then a massive piece of slow-roast pork with potatoes. There was also a moussaka and a spanakopita that others contributed to the feast, and something for the vegetarians too. 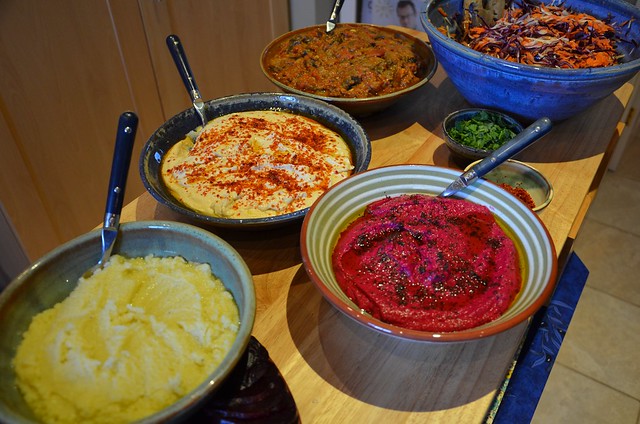 For the meze, because I was feeding non-Greeks but grecophiles, I wanted to do a mixture of classics and slightly more out-there dishes. Alongside a big ‘politiki’ cabbage and carrot salad, we also had some simple things like hummus, beetroot mutabal, Moroccan aubergine zaalouk, and cooked and sliced beetroots served with skordalia- a potato and raw garlic spread that you serve with boiled vegetables, grilled meats and fish.

I used Maria Elia’s skordalia recipe- I’d never made it before and was once again astounded at the amount of olive oil used (it’s nearly equal weight of potato and olive oil) - reinforcing the conclusion that the true secret to Greek food is vast quantities of the good liquid gold. 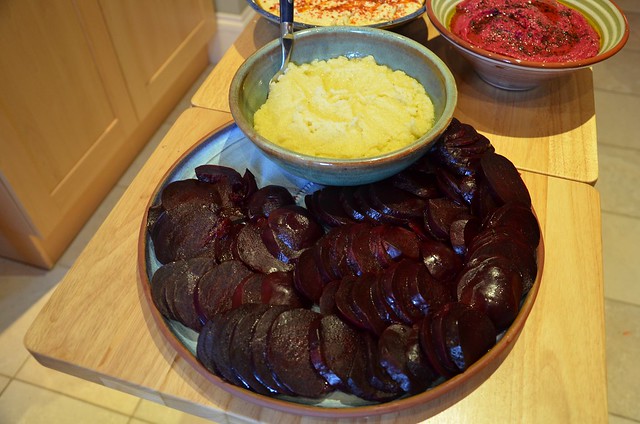 I was really impressed at how up for trying all these super-garlicky things Nick’s family were. The skordalia, which I thought might be a total wipeout, turned out to be the big hit- and everyone was even up for a glass of ouzo accompanying the meze, despite it being about 1pm on a December day in Wiltshire. 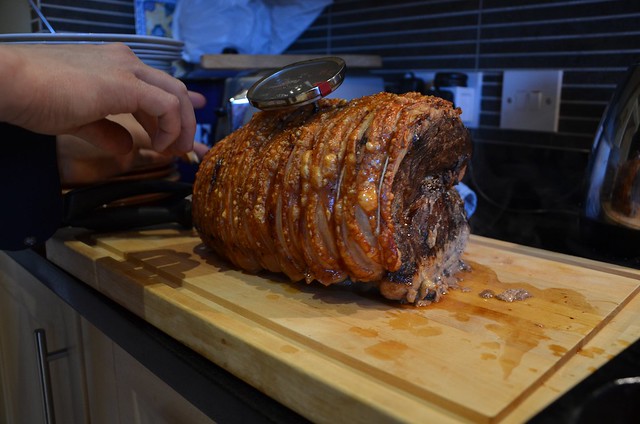 For the main meal, we ended up with a 5kg boned leg of pork. We worked out that if we wanted to just straight-up roast it, we’d have to put it in at about 5 in the morning for it to be ready in time for lunch, so instead we decided to slow-roast it overnight. We put it in around 10:30pm on a high heat for about 40 minutes, then covered it in foil and turned it right down to about 100C. The idea was to leave it in the oven low and slow overnight, but someone in the household came home late from their work Christmas party, saw the oven and assumed it was accidentally left on, and helpfully turned it off! But despite being off for a few hours, it was still okay and after an emergency meat thermometer purchase, we managed to get it up to temperature, whipping off the foil and whacking the heat up on high again for the last half hour to get the crackling. 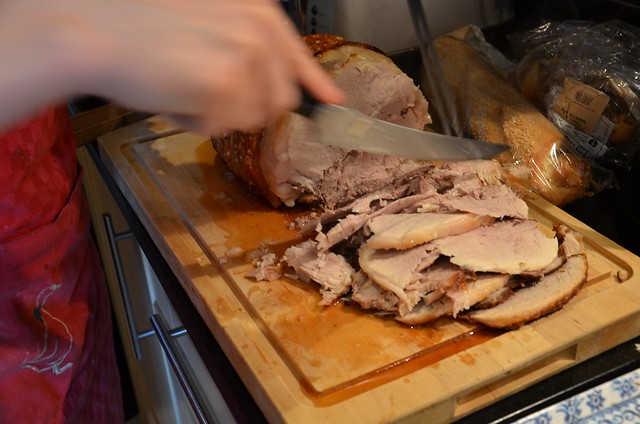 Alongside the porker, we also had lemony roast potatoes (recipe and photos to come another day), tzatziki and a big pot of gigantes (tomato stewed butter beans). In the end, we barely made a dent in the pork- we probably ended up with 2 kilos of leftover pork! Because Greeks tend to eat so many meze, meat often forms an integral part, but not the main part of the meal. A good lesson for next time! 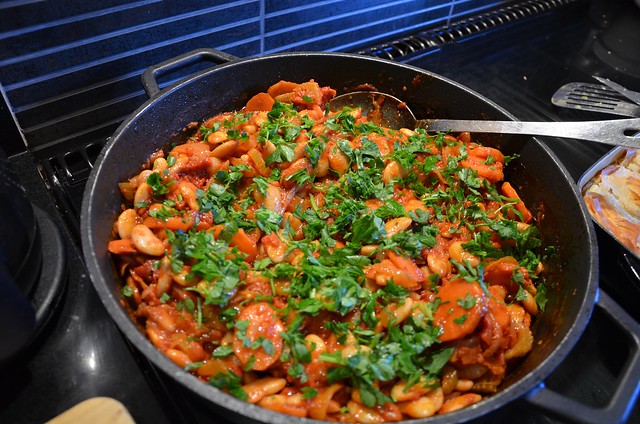 The best thing about this meal is how low cost and low effort it was for the impact. Everything was prepared in advance and most of the ingredients were vegetables, beans and pulses. There are no fancy techniques and most of the dishes are one-pot. You can see why massive meals form such an integral part of Greek culture- why shouldn’t it!

This is a great and very cheap dish to make for lots of people- you can easily double or triple the amounts. It’s hearty enough to satisfy a vegetarian as a main, but also complements a lot of meat dishes as a side.

The Recipe 1. Heat 3-4 tbsp olive oil in a large, heavy based oven proof dish, like a le creuste or cast iron. It doesn’t need to have a lid but it helps. When the oil is heated, add your sliced onions and a good pinch of salt (half to a 1 tsp). Stir and leave on a medium heat to soften and start to caramelise. (Top tip: putting a lid on for the beginning of this process will help the onions sweat and speed the cooking up. But make sure you watch the onions and take the lid off in time to lose the liquid- I usually do this after 5-10 minutes). 2. When the onions have started to soften and slightly colour, add the carrots, celery and garlic and cook until these are also soft, but it doesn’t matter if they still have a bit of bite. They will continue to cook in the oven. 3. Add the tomato puree and stir for a minute- this helps sweeten the flavour and take some of the rawness from the puree. Add the canned tomatoes, bay leaf, stock and sugar and turn the heat up. When it starts to spit, add a the red wine and let it cook off then add the beans strained of their liquid. If it’s looking too thick, add a bit more wine or some water- you want there to be a sauce, but not much of the liquid will cook off so you don’t want it to be watery! 4. Stir in the chili flakes, season to taste with salt and pepper, then add the rest of the olive oil. Really don’t hold back here- the oil is what will marry the flavours. Cover the dish with the lid or some foil and place in a pre-heated oven on a medium-high heat, like 175C. After about 40 minutes, the sauce should look a darker red and should have dried out a bit. Give it a quick stir, adding more oil or liquid if you need to, then whip off the lid/cover and put it back in the oven for another 20 minutes or until it looks a bit caramelised on top. You can either eat it hot or serve at room temperature. The beans will keep in the fridge for a few days.