Like Persephone, pomegranates are what get me through winter. I love their sharpness, the juicy crunch of the seeds, and how they seem to be able to replace tomatoes when the latter are a sorry sight to see. But most of all I love the morning ritual of peeling one.

Like most pomegranate appreciaters, I used to find getting to the juicy fruits a messy and tedious task. Unsurprisingly the best way to go about doing this is a matter of much discussion in my family, each of us proposing different methods. Eleni Sr, ever the pragmatist, just goes for plonking a bowl in a deep sink and getting the seeds out as quickly as possible. This is definitely the least messy of the fast methods but I end up picking out a lot of pith and mushy seeds.

My brother on the other hand has devised a no-mess method of putting the pomegranate in a bowl of water, and getting the seeds out that way. I haven’t actually tried this, but he claims the seeds all ‘float to the top’ and you don’t get juice everywhere. But all that precious juice ends up diluted in so much water! And again, doesn’t pith float? Also, they live in a county in the US that frequently has drought alerts. Bowls of water are quickly abandoned.

Made famous by the authoritative Ottolenghi, this particular method perhaps aggrieves me the most. It invovles cutting the pom in half and then holding it over a bowl and whacking it with a spoon. Not only does this make a huge mess, all the seeds get mushy and bruised so they don’t retain their beautiful shape and you lose loads of the juices. I also believe this really doesn’t take less time, and again you’re left with the few nasty seeds that you wouldn’t want to include, so unless you have a perfect pomegranate, you’re going to get in trouble, and why would you whack a perfect pomegranate??

This is a 10-minute video of a guy explaining how you’ll never have to take 10 minutes to peel a pomegranate again, because his method is so quick it only takes 10 seconds or something. Maybe it would work as well as he claims if my hands were as big as his are. But again, I think whacking a pomegranate is one of the current food world’s greatest travesties.

The lebanese mother or vegan vamp

This is third-hand information and I’ve never witnessed any of my true-to-life Lebanese friends do this, but according to my [Lebanese] friend’s [American] friend’s mom, apparently Lebanese mothers use the following method when they are peeling pomegranates for their darling sons in particular. Take your whole pomegranate and push/rub it on the counter so that it gets really juicy inside. You really have to do this for longer than you are comfortable with until you feel like you are holding a ball of juice. You then cut a small x incision through the skin in the middle of the fruit, and suck the juice out like some sort of vegan vampire. When you’re just left with the husky corpse of the fruit, then you cut it in half in the usual way and all the seeds fall out. This is pretty fun and definitely a ‘cooks perks’ approach to pomegranate peeling, but again, you lose out on perfect juicy jewels once you get inside. 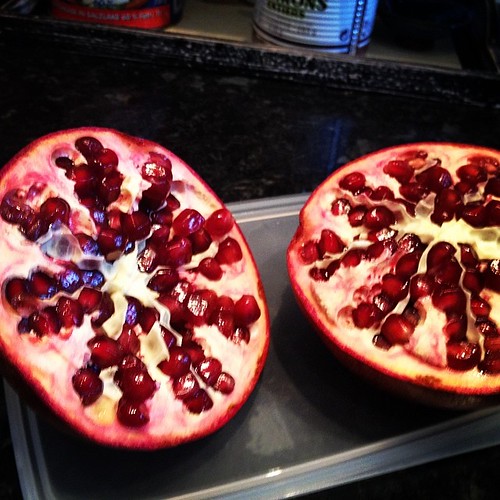 The only way to (satisfactorily) peel a pomegranate

If you take your pom-eating seriously, the only way to get to the little red gems is lovingly and tenderly, I’m afraid. Yes, it usually takes me 5-10 minutes, but it’s the perfect way to fill your time while you’re waiting for the pour-over to trickle through. It turns out pomegranates have their own organised chaos and all those little seeds are actually shaped into wedges like an orange. Carefully take a paring knife and cut just through the skin around the circumference of the pomegranate. Gently tear the two halves apart and set one to one side. Make a small cut into the edge of the skin of the half, so that you can tear it apart into halves gain. You should now have started to identify these segments. Carefully pull out a segment at a time, and work the seeds off the pith, feeling with your fingertips for any dodgy/mushy ones.