It’s too hot in London to do much cooking this week, but there is plenty of snacking to do. The World Cup lends itself to rustling up some snacks before/during/after/between matches. For some reason my family calls snacks snackerakia. This is not a Greek word but it is in our Grenglish lexicon. Try saying it out loud: ‘snack-er-ahkya’. See? It’s fun.

The key to good snackerakia is to rustle something up quickly without getting the flat hotter than it already is. Greeks are particularly good at this–– it’s impossible to go to a Greek person’s home without a plate of nibbles being put in front of you, and no fussing about cutting crudites or bunging tarts in the oven. A Greek homemaker puts boyscouts to shame. 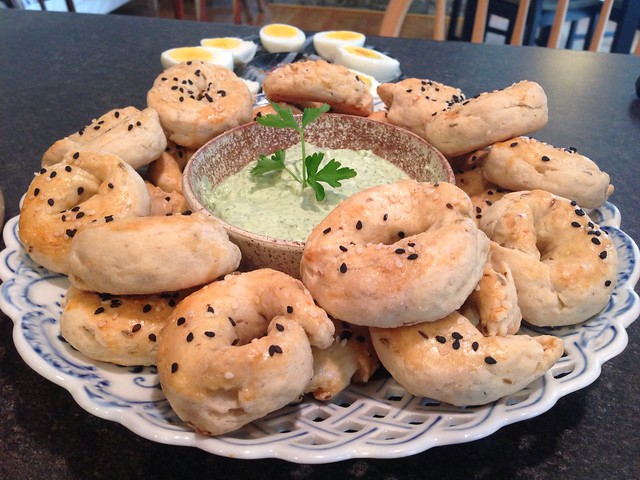 A plate of snackerakia will almost certainly contain some sort of hard bread or savoury biscuit-– Yotam’s ka’ach bilmalch (pictured) make excellent snackerakia. Some hard cheese, a couple olives, maybe a few tomatoes. Snackerakia are appropriate at all times of the day: with coffee in the morning, with ouzo or wine, with a glass of homemade lemonade in the afternoon. There’s never too many snackerakia.

“how simple and frugal a thing is happiness: a glass of wine, a roast chestnut, a wretched little brazier, the sound of the sea.”